In July 2016, the U.K. Payment Strategy Forum (under the umbrella of the Payment Systems Regulator) published its draft strategy entitled “Being Responsive to User Needs”.  This was the culmination of ten months of intensive work which had commenced with the formation of the PSF in early 2015 and a gathering of Payment Professionals at a Payments Community event in September 2015.  I was present at that event and our task was to whittle down a list of over 200 issues that had been identified by the Payment Systems Regulator as “detriments” in the U.K. Payments Industry to a core set (it turned out to be 83) that would be then analysed and worked through by the various working groups established under the Payment Strategy Forum.

Some rules were quickly established.   Wholesale payments were out of scope (the Bank of England had already announced in January 2016 that it was going to produce a blueprint covering an upgrade to the U.K.’s Real Time Gross Settlement System – subsequently published in May 2017[1]) and cash and card services were also largely excluded.

Following the initial consultation round, in November 2016, the PSF published its “Payments Strategy for the 21st Century”[2].  This was based upon a set of solutions which were summarised as:

These were further broken down as follows: 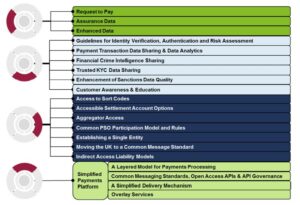 Since that point, some strong progress has been made against these objectives:

In parallel, the Bank of England has made good progress towards the introduction of its new RTGS system.  In July 2020, Accenture were appointed to develop and build the new service and, since then, the Bank’s progress towards its launch has continued apace (with commercial banks beginning a series of attestation stages to prove their readiness for its launch).

Other key industry developments have also taken place during this time.  Of particular note:

The flagship of the Payment Strategy was the introduction of the U.K.’s New Payment Architecture (NPA).  This was designed to provide a layered approach; a core central settlement platform underpinning a number of service layers and channels thereby encouraging open competition from different service providers.  It was planned that this would replace the existing retail payment systems across a phased timeline[3]: 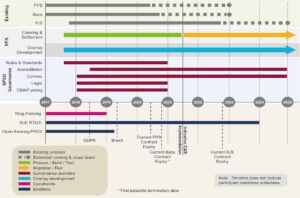 Sadly, notwithstanding the launch of a Strategic Partner Procurement Process by Pay.UK in October 2018[4], things have subsequently gone backwards in terms of the rollout of NPA.  Its scope has diminished, no vendor has been selected and, at the end of July 2021, the PSR launched a consultation aimed a further de-risking the programme[5].  If adopted, the end result will be to narrow the scope of the NPA Central Infrastructure Services (CIS) to a portion of existing FPS functionality (namely single push payments) and for a further vendor selection process to take place.  It is not certain what would happen to the remaining functionality that sits within FPS (e.g. Standing Orders) and whether FPS would therefore remain operating in cut-down form for the foreseeable future. With regards to Bacs, despite being the largest of the U.K. payment systems by volume, it would be excluded from the cut-down NPA scope (although Pay.UK would be tasked with carrying out “further work on the long-term strategy for Bacs”).

In the meantime, the PSR has had to extend (for both FPS and Bacs) the timeline for a mandatory re-tender of their central infrastructures provision.  This was not the case for LINK (which remains a standalone payment system operator outside the scope of the NPA work) who successfully concluded their mandated tender in October 2019.

Back in May 2008, the launch of the Faster Payments System put the U.K. firmly in the list of early adopters of real-time retail payment technology with the ability of consumers to initiate payments on a 24×7 basis.  Since then, close to sixty countries now have Faster Payment systems.

Having participated in that Payment Community event back in late 2015, it is depressing that, six years later, we are little further forward with the rollout of NPA.  Even with a fair wind behind the current position, by the time the PSR’s consultation has concluded, an RFP process run and development work commenced, we must be looking at 2024/25 at the earliest before a cut-down system could be introduced.

Meanwhile, the U.S.A. is looking to introduce FedNow towards the end of 2023 notwithstanding having started their process well after ourselves.

At this point, should we start considering other alternatives?  The latest incarnations of Faster Payment systems being introduced internationally contain considerable technical and functional enhancements over and above the Faster Payment System here in the U.K.  For example, Vocalink (who operates the existing Faster Payments System here in the U.K. for Pay.UK) provided the technology that underpins the 2017 PromptPay system in Thailand and, working with The Clearing House in the U.S.A., launched the Real Time Payment system (incorporating “Request to Pay technology”) there in late 2017.

Given the delays in the NPA programme, what is there to prevent an alternative, more modern “off the shelf” payment system from being set up here in the U.K. by another body, either new or existing, competing with Pay.UK?  If based upon those already operating elsewhere in the world, it is highly likely to meet the regulatory standards required to operate here.  This should also tick the “competition box” – one of the core statutory objectives of the PSR.

Such a system could likely be introduced in an accelerated timescale and could provide choice to the commercial banks in terms of payment routing (and thereby provide enhanced resilience and interoperability in the payment eco-system).  It could also be set up in a manner that could accommodate any move towards the adoption of digital GBP should the Bank of England decide to launch a CBDC.

Perhaps now is the time for more competition to enter this market-place?

This website uses cookies to improve your experience while you navigate through the website. Out of these, the cookies that are categorized as necessary are stored on your browser as they are essential for the working of basic functionalities of the website. We also use third-party cookies that help us analyze and understand how you use this website. These cookies will be stored in your browser only with your consent. You also have the option to opt-out of these cookies. But opting out of some of these cookies may affect your browsing experience.
Necessary Always Enabled
Necessary cookies are absolutely essential for the website to function properly. This category only includes cookies that ensures basic functionalities and security features of the website. These cookies do not store any personal information.
Non-necessary
Any cookies that may not be particularly necessary for the website to function and is used specifically to collect user personal data via analytics, ads, other embedded contents are termed as non-necessary cookies. It is mandatory to procure user consent prior to running these cookies on your website.
SAVE & ACCEPT